A Moment In Time

Just as soon as I proudly express how well Jonah was making progress in the last week...the home nurse had to show up with her scale and burst our cheery little bubble. According to that menacing scale (my nemesis), Jonah did not gain any weight- not even an ounce- from his previous weight taken 5 days earlier. Rob and I (as well as our families) all look at him and each other absolutely baffled. How can this be? He looks as if he is gaining weight...feels as if he is gaining weight...but unfortunately, nothing.

Yesterday also marked one month since Jonah's NG tube had been placed and that meant a new one needed to be put down. Yesterday just so happened to be Rob's birthday and I kept thinking the perfect gift would be to see his son just chugging away on his bottle with no NG tube in sight. However, this gift could not be given...per se. Rob worked from home yesterday and we woke up with big plans. We were going to take the tube out and the magic was going to happen ;-) Well, that wasn't exactly how the day unfolded. I took out Jonah's NG to see his adorable face free of any tape or tube for the first time since he was delivered. We cleaned him up, got him dressed, and set our sights on bottle mania. Jonah, on the other hand, quickly told us he just wasn't ready yet. It's not as if he didn't take to the bottle at all, he just didn't take to it like we had hoped with the tube removed from the back of his nose and throat. He took about an ounce at a time which is exactly what he had excited us with at the end of last week. No more, no less.We had read so many blogs and websites, talked with many other families with stories of children who had that "light bulb" go on as soon as the NG came out. That silly tube can be the source of such irritation...reflux, congestion, swallowing difficulties, etc. We really thought that Jonah might have a better chance at the bottle without this nuisance. At the end of the day, we had to put the NG back down and rev up the pump for more continuous feeds- although, we are doing more bolus feeds again to keep practicing with the bottle:)

Rob did have a great gift though. We both did! It was a wonderful day to celebrate a moment in time without the only evidence that our little baby had anything wrong with him at all. It was so liberating for all of us to walk around the house, to walk around the block without all the "extras". We didn't hear Jonah try to cough the tube out or throw up (of course, he didn't have much in his belly to throw up) and instead we played, took pictures and reflected on how far we have come!! We have received many gifts to celebrate and this moment will soon turn into a loving memory as we delight in  all that is to come.
Happy Birthday to the love of my life!!!

...Quick question to other mom's of heart babies...have you seen any of these children actually gain weight on breast milk alone? Or is this just a pipe dream of mine?? First, I am a naturalist at heart, breast milk has to be the best, right?. Second, I am afraid to start experimenting with formula after formula and all the aches and pains of testing each... 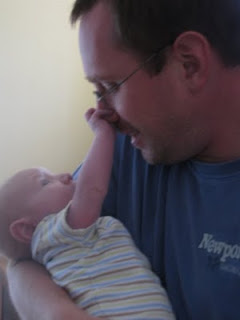 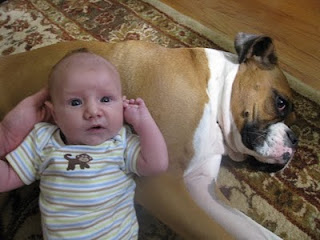 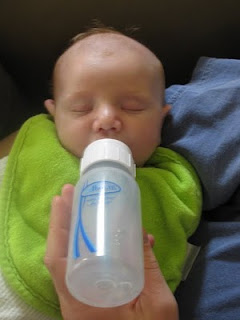 How Jonah Got His Groove Back

Hello everyone!!
It feels so good to be "talking" to the outside world again! Jonah has been home for 3 and 1/2 weeks now and as Rob described in the last post we were faced with many challenges right away which were so much more mentally and emotionally taxing than I ever expected.

From a cardiac standpoint, Jonah goes to clinic every Friday where the doctor and nurse specialize in seeing children who are recovering from their 3 step surgeries, specifically the Norwood. Once every month the team performs and EKG (to check heart rhythm) and an Echocardiogram (which looks at heart function)...Jonah had these done last week. His shunt and the aortic arch (where Dr. Ilbawi placed a bovine patch) look really good and are in optimal working order. We could not feel more pleased about his healing progress. God is so good!

From a GI/feeding standpoint, Jonah is also making some progress. He is doing so in small baby steps but we now understand what is par for the course and we are trying not to let our own expectations get the best of us...I should say, I am trying not to do that :) We came home giving Jonah bolus feeds through his NG which mimic a normal feeding pattern for most newborns; which is eating every 2-3 hours. These were so difficult in more ways than one. First, Jonah was growing intolerant of the feeds. Throwing up, diarrhea, abdominal cramping, etc. Second, the repetition felt like we were living the movie of Groundhog Day and we never seemed to be meeting any goals. Jonah was taken off Reglan-one step forward, and put on continuous feeds-one step backward....sort of. The continuous feeds are given through a pump that infuses the milk 24/7. It has been such a gift to get some sleep again!! For Jonah especially. He has really done well with this since he is now gaining weight and BM's look better. He is a whopping 8lbs 12.5oz. This slow and steady gain is typical for these kids since by the nature of their heart defect they are already burning more calories and the crying fits that Jonah had for 2 weeks didn't help in that regard either. I said one step back because while Jonah is on the continuous feeds he never feels hungry. If he doesn't naturally feel the need to eat, it can mean learning to bottle feed might be more difficult. Not hungry? Why try? But we are very happy to announce that Jonah took his first 5ml (basically 1tsp.) by bottle last night!!! It took Rob an hour to accomplish this with Jonah, but they did it! Rob really has the patience of a saint and that is why he is just the man for the job. I have to admit, patience is not a virtue of mine. Rob was the first to get Jonah to take the pacifier also...again proving not only to be the best dad but also my most amazing counterpart!!

I have been so easily frustrated with these very basic baby skills. I mention expectations because I have such a bad habit of putting the pressure on that I am afraid I have projected that on to our little buddy. I kept thinking practice makes perfect and we need to carve out bottle-time during the day as much as we can. I was looking down and thinking, "Why is this natural instinct so easily lost and so hard to get back"? I, of course, was NOT helping the situation. I have slowly come to accept that Jonah will get this in his own time. They keep telling us it is like the switch of a light bulb, one day it will just turn on. So with that as a constant reminder and Rob's patient persistence, I know this too shall pass. Jonah will be eating like a big boy in no time!! As we wait, we are enjoying a little more sleep and a much happier baby. How can I argue with that? Yup, God is good.
Posted by Rob and Stacie at 3:29 PM 1 comment:

It's been a long week since our last post.  Jonah's 'colicky' behavior continued all last week.  If he was awake, he was crying.  If he was asleep, he was moaning.  The crying and stomach cramps resulted in throwing up.  And throwing up resulted in being hungry.  And being hungry resulted in crying fits.  This viscious cycle was taking a serious toll on both Jonah and his parents.  The every 2.5 hr feedings were quickly becoming unsustainable.  We knew he wasn't getting the rest he needed to gain weight, and to make matters worse, Jonah wasn't showing any signs of improvement with a bottle and he would take the pacifier maybe only 30% of the time.  It's a cruel joke to bring a newborn home who can't be consoled by neither bottle nor pacifier.

However, the cardialogist and nurse didn't need to hear it from us to realize we needed to make changes.  Jonah weighed in at 8.4 ounces, which was the same weight as the week before.  In fact, Jonah had only gained 1 ounce since being discharged from the hospital 2 weeks ago.  Considering he's supposed to gain 2 ounces every day, we were failing.  All the crying, lack of sleep and throwing up was wasting all the calories we were feeding him.

The doc was quick to explain that GI issues and acid reflux are the biggest challenges post-Norwood, but there were a couple things we could try.

We would try these 2 changes, hopeful we would see improvement by the end of the weekend.

So we left the Noorwood clinic, skipped the afternoon Reglan dose, and Jonah slept for the next 4 hours straight!  Since coming off the Reglan and getting the continuous feeds, he has been much more content and peaceful.  The throw-ups and stomach discomfort has decreased, and everyone is getting a little more sleep.  Also because he's overall more relaxed, Jonah seems to be getting better with the pacifier and is even tolerating the bottle being presented at times.  It all couldn't have come at a better time.  We were able to attend his cousin Nola's 1st birthday party and hang out all weekend without the anxiety of Jonah's distress and discomfort.  Not to mention he's much more adorable and sweet when he's not screaming his head off.  We're praying this trend continues.

Hope everyone enjoyed the Labor Day weekend as much as we did!
Posted by Rob and Stacie at 10:45 PM 1 comment:

We (Rob and Stacie) are expecting our first child in early August: a baby boy we've named Jonah. During our routine 20ish week ultrasound, we discovered our son has a very serious and rare heart defect known as Hypoplastic Left Heart Syndrome (HLHS). We moved from Minneapolis to Chicago in January 2010. In the process we both started new jobs with new employers, sold our house in Minneapolis, bought a house in Chicago; all the while learning, coping and preparing for Jonah's arrival. This blog is to help share our journey with our wonderful friends and family and to be a portal to other families who may be dealing with HLHS, either from experience or for the first time.